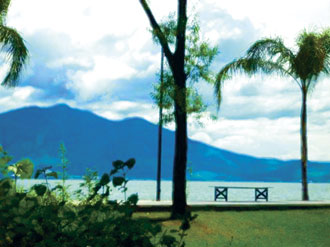 Cerro Garcia, the dormant volcano across from Ajijic, has taunted me for 17 years to get off the couch and visit. Over those years I’ve developed a defense why I shouldn’t. Hikers have said it is a long, dangerous and exhausting climb. Others have said that strange cooking goes on up there; the trails are not well marked and hikers have gotten lost and spent the night up in the clouds. I focused on the rewards of the climb; incredible views, the foliage colors and how the wilderness would strip away the clutter from my materialistic world.  As the years rolled by, the taunt intensified, then one day I came up with a simple plan: Do it.

I found two hikers. Bruce Pinder is a positive 75, 6’1”, wiry guy. Keith Tandy is 50, 6’4”, with superman qualities but without the tights. Bruce and I secretly felt Keith could carry us down the mountain if one of us croaked. Then there was me; 73, short, loud and taunted.

Not long into the hike we quickly realized that the overgrown foliage spilling onto the trail may make for a slower climb. We became bushwhackers without machetes. The closest thing to sharp that I had was a plastic knife in my lunch bag. The trees surrounding the mountainside made it difficult at times to see landmarks, but when we could see a red marker it was in such an obvious location.  The less obvious parts of the hike were either a lightly trodden trail or refuse left behind by previous hikers. I would grin with delight when I saw an empty bottle of water or a candy wrapper as it verified that we were on the right trail. Of course this assumption was predicated on the theory that the previous hikers (litterbugs) were not lost. Other times we used our intuition and guessed to determine the right trail. This was no place for sissies, so we sucked it up and dug deep.

We missed the first scheduled rest stop at 6900 ft, called the Lookout because we were preoccupied with staying on the trail. With no GPS, I guess our intuition was a little off.  Later on our winding trail was interrupted by a series of large boulders. Here we ran out of trail markings. Beyond the boulders we spent time thrashing around before we found the trail. Eventually the forest opened up to incredible lake and mountain views that slowed our pace. Our “oohs and awes” became blurts of excitement. 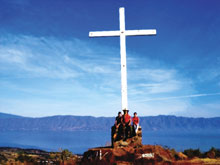 There was a bit of an insulting theme to this hike that kept repeating itself. After two hours into the hike we came upon a knoll that was far steeper than any we had experienced. The prize at the top of this insult was the summit, which we couldn’t see. It was hard slugging. Each step became slower and higher while each breath and heart beat became quicker.

For an hour our eyes were trained in the general direction of the invisible summit. The foliage was too thick to give us any sliver of motivation that we desperately needed. Mother Nature had been working overtime. Then, like a mirage through a gap in the forest, we saw the spark of motivation we needed so badly; a white metal cross some 150 feet away. It was not a pretty sight to see three grown men leaning up against the concrete base staring at the cross of Jesus with their tongues hanging out making an unintended pool of spittle below their chins. We introduced the sacred grounds to a panting sound usually heard at the Boston Marathon finish line and a sprinkling of expletives heard during  traffic jams. I’m sure Jesus forgave us.

The views were spectacular, the kind you see in National Geographic but without the subtitles. We jabbered away with our mouths full of lunch. This was not the place for table manner etiquette. Excitement does that to three big city boys in the wilderness. While we were joyous, we knew this was the false summit, not the real one. The real one was another hour away. After 15 minutes of being watered and fed our breathing and heart rhythms were back to normal. It took a split second of discussion for us to agree that we would push on to the Big Kahuna in the sky. Obviously our minds were not back to normal yet. But hey, we were young with old legs, we were invincible, we were close to our goal and we were semi-comatose.

The trail to the real summit was narrower and not as well trodden, perhaps because many hikers had turned back at the false summit.  We pushed on and then to our dismay we started to descend. Another insult, I mumbled. The forest could hear the sound of glee as we started to ascend once more, then hear three men groan in unison as we descended again. Coney Island’s roller coaster came to mind, but this was a lot slower. Finally we reached the last insult, I mean ascent, to the real summit. It was steeper than anything we had encountered. Twenty steps then stop, gasp and puff. We repeated this mantra for what seemed longer than Rip Van Winkle’s nap. My alter ego was screaming at me to listen to reason and turn back. I mentally turned my hearing aids off so I couldn’t decipher my inner jabber. It just made too much sense.

We pressed on. I was driven by obsession for glory, bragging rights, embellished stories and getting our story published in El Ojo Del Lago. Within an hour we reached the 9079 foot summit, or did we? I was looking for a sign that might say: “THE REAL SUMMIT” or “THE REAL SUMMIT IS ANOTHER HALF HOUR AWAY.” No such sign existed.  I mimicked Rocky Balboa’s dance that he did at the top of those Philadelphia steps, but my arms were at half-mast; I was dog tired. We high-fived, hugged, took pictures and gawked at the incredible views.  Then we saw the Nevado-de-Colima Volcano. We fell into a silenced trance. High altitudes make people say dumb things. Mine was suggesting sheepishly that we climb Colima. That sheepish remark rallied into a bullish: “Hell, why not!” So we are off to see the wizard who lives at the summit of the Colima Volcano this April. It occurred to me that when three big city boys make decisions in the high altitude, someone should alert the American Psychiatric Association.  I wonder if Dr. Gotta B. Nuts of Harvard is still doing pro bono counseling.

We turned from fantasizing about our future climbs to focusing on getting down the mountain. We streaked down with few breaks and little interest in jabbering at one another. We were hell bent for leather for the frozen beers that awaited our parched and tired bodies.  At Keith’s house, we sat staring at our conquered nemesis as we guzzled beers and scoffed down a pound of cashews in a New York minute. What a ride!

There are several personal experiences I took away from this hike. The paramount one is that when a person has a commitment and passion for a goal, no barrier or excuse will get in the way.

For Bruce, he had forgotten his heart pill that morning. He didn’t tell us until we arrived back at the trail head, six and a half hours later. He could have cancelled, turned back at the false summit or ask that we slow down. He didn’t, not a peep. One of the things that drives Bruce is his positive outlook on life and his desire to see and experience it all. Cerro Garcia was his dream and nothing would stop him.

For Keith, he sprained his ankle playing softball five days earlier. He didn’t tell anyone. He could have cancelled, but he didn’t. We heard no complaints, groans or moans. Upon our return to the trail head we could see the inflammation, redness and the bugle in his hiking shoe. Ouch, man! He was done playing softball for a while. Or was he? You never know about him. He has true grit and we saw it.

As for me it was my longest, highest and most grueling hike of my life. At the beginning I felt nothing was going to stop me. During the ascent I was tested. But the thought of failure was more punishing than the new challenges pounding away at my body. The further I hiked the more aware and confident I was that my body would not let me down in reaching my goal. My physical and mental capacities were working in sync. If they had worked separately, I would not have made it. I had found my inner zone again and I will never lose it moving forward.

Watch out Nevado de Colima Volcano, here we come. My wife plans to notify the Psychiatric Association when we are going.