The Many Faces Of Eva 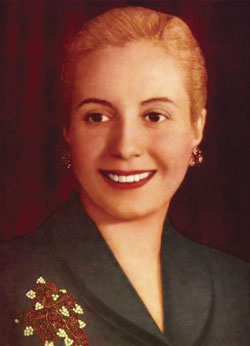 “I have just one valuable possession; the love that my people have for me. Shed no tears for me.” This line, said by Evita to her adoring citizens during her last days, sparked the words for the enduring song, ‘Don’t Cry for Me, Argentina.”

On July 26th, 2002, exactly 50 years after her death, Eva Perón’s, great niece, Cristina Alvarez Rodriquez, inaugurated the Evita Museum in the trendy neighborhood of Palermo in Buenos Aires, Argentina.  Housed in the mansion which Eva bought in 1948, restored and designated as the location of El Hogar de Transito, a shelter for women and children with no resources, the interactive museum creates an atmosphere where people can understand the life of the most important woman in Argentina’s history. I visited the Museo Evita recently and watched actual film footage, as Eva Perón, always the proverbial actress, reinvented herself from birth to death.

Her assortment of names represented the role she was playing and her audience. It began when influential businessman, Juan Duarte fathered five children with Eva’s mother, Juana Ibarguen, despite his being married to another woman at the time. As per Argentine law, illegitimate children didn’t have the same rights as offspring of married parents.

When Eva’s father died, his ‘second family’ was barred from attending the formal funeral. Duarte’s wife had no intention of allowing her husband’s mistress and his bastard children the legitimacy they deserved. Duarte, who had financially supported Juana, left her destitute. In his will, he granted her children the use of his name after his death. Eva never forgot or forgave the humiliation and poverty she, her siblings and her mother suffered.

According to biographers, Marysa Navarro and Nicholas Fraser in their book, Evita—The Real Life of Eva Perón, Eva’s baptismal papers indicated Eva Maria Ibarguen, was born May 7, 1919. But when Eva married Colonel Juan Perón, her birth certificate read Maria Eva de Duarte, born May 7, 1922. Eva realized that a forged birth record that concealed her illegitimacy would be her only protection from her future husband’s military cohorts and political constituents.

Ironically, Juan Perón’s birth certificate had also been forged. The fact that his parents were not married at the time of his birth would have denied him entry into the military. Juan’s grandmother, assisted by persons of influence, erased this damning evidence from his birth record. The document tampering allowed him entry into military school and Argentina’s army, where he attained rank of Colonel and head of Department of Labor.  Had the birth facts for both Eva and Juan not been altered, the history of Argentina, as we know it, and the story of Evita would never have unfolded.

General information about Eva’s penchant for acting, her escape to Buenos Aires from her impoverished family at the age of 15 and her gradual rise as a radio personality and film star are well known. Biographers Navarro and Fraser refute the notion that she fled with actor Augustin Magaldi, but report that Eva’s mother accompanied her to the audition. When Eva was awarded a radio contract, she remained in the capitol with family friends.

In 1944, Eva met Colonel Perón at a government fundraiser to aid earthquake victims of a destroyed Andean city. Their attraction to one another proved immediate. Political turmoil erupted for Perón, imprisoned when the military junta feared his growing popularity with labor unions. Workers known as Los Descamisados, the shirtless ones, threatened national strikes unless Perón was released. On October 17, 1945, he reunited with Eva, who had supported him throughout these turbulent times. Indebted to her devotion, Perón, 48, married Maria Eva de Duarte, 24 with her newly ‘edited’ identity, five days later on October 22, 1945.

He ran for President of Argentina as head of his Perónista Party, and she became the first spouse in the country to campaign with the candidate, her husband. On Inauguration Day, June 4, 1946, the First Lady Eva Perón stood next to the President instead of behind him, a sight never seen by the Argentine people. As wife of the President, she asked to be known as ‘Eva,’ but as the person who would address the concerns of the public, she wanted to be called, ‘Evita.’  She became an adored, pop-culture figure overnight.

As we proceeded through the museum, the full extent of Eva’s outreach of social programs to help the poor, the elderly, women and children unfolded. I understood Evita’s rise to iconic stature in the eyes and hearts of the people of Argentina with more clarity.

In 1948, she inaugurated the Fundación Eva Perón, which became the keystone of her legacy. Monies from the foundation built 12 hospitals, a school of nursing, homes for the elderly and orphaned children. The Tren Sanitano, a train that traveled throughout Argentina, provided free vaccinations, medicines, x-rays and medical treatment to the poor along the route. She built ‘City Evita’ where destitute mothers and children could live in single family dwellings rather than in ramshackle tenements. She provided equipment and money so that children could participate in sports. Every year, the foundation gave away 200,000 bicycles, 500,000 sewing machines, shoes, pots and pans, common things that families needed.

Evita spearheaded the suffrage movement to give women the right to vote and in 1951, Argentina’s Congress included elected female representatives for the first time. They were all Perónistas.

After her diagnosis of cervical cancer in 1950, Evita worked longer hours, throwing herself deeper into the social needs of her people, perhaps sensing her fading time to help. Despite desperately wanting to run for Vice President alongside her husband during his bid for a second term, she withdrew because of her health.

The obscure facts I learned about Evita’s life proved most interesting to me. Supported by biographers Navarro and Fraser, I offer a few: Eva Perón was the first woman on the cover of Time Magazine during her lifetime; she wore pants, she was Argentina’s only First Lady to stand next to the President in the Official Portrait, she was the first person in Argentina to have chemotherapy, and to undergo a radical hysterectomy. During the May, 1952 parade through Buenos Aires to celebrate Juan Perón’s second inauguration, Eva was so weak that she wore a body cast of plaster and wire under her luxurious coat, so that she could sit upright. She weighed 82 pounds.

Evita died on July 26, 1952 at the age of 33. Most jarring was the fact that Perón’s first wife also contracted cervical cancer and died at the age of 30. These two women, bound together to the same man at different times, met the same fate. It makes for a mysterious connection.

Evita’s death caused more drama than her life. Several weeks prior to her demise, the Congress had awarded her the title of ‘Spiritual Leader of the Nation’ and indeed the public’s mourning reached epic proportions. They had lost their ‘angel of hope.’ Granted a State Funeral, previously reserved for heads of State and a Requiem Mass in the Cathedral, Evita’s body was embalmed and placed in a glass casket. Juan Perón intended that she would be on display forever. Three million people lined the streets on the day of the funeral, eight were crushed to death and 2,000 injured as the public rushed to be near the casket as it rolled by; every flower shop in Buenos Aires had been stripped bare and flowers from Chile had to be flown in. The film footage of her funeral shown in the museum displayed these somber, striking images. 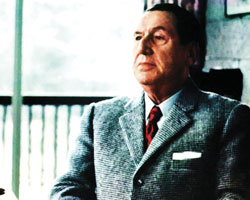 During the construction of a memorial to showcase her body, Perón’s magic failed without Evita. A military coup overthrew him in 1955 and he fled, leaving Evita behind. The military junta stole her casket and it went missing for 16 years. In 1971, it was revealed that her body had been interned in a crypt in Milan, Italy under the name of Maria Maggi, yet another identity. The military government made it illegal to possess pictures of Juan and Eva, or even to speak their names.  The government tried to erase Evita’s sainthood, but failed.

Juan Perón returned to Argentina from exile in Spain in 1970 with his third wife, Isabella. He was elected President for a third term, and ironically his wife was elected Vice President. Eva’s dream became Isabella’s reality. Perón died after one year in office and his wife became the first woman President of any country in the Western Hemisphere. Isabella had Evita’s body returned to Argentina and she rests now in the Recoleta Cemetery in Buenos Aires in the Duarte family mausoleum. A steady stream of worshippers still leaves roses every day.

Movie director Fabienne Rousso-Lenoir sums up the adoration that Evita still evokes in the Argentine people. He said, “In all of Latin America, only one woman has aroused an emotion, devotion and faith comparable to those awakened by the Virgin of Guadalupe. In many homes, the image of Evita is on the wall, next to the Virgin.”