A Medal Of Honor Long Overdue

By Kelly Hayes-Raitt
(Courtesy of The Argonaut, where this article was first published) 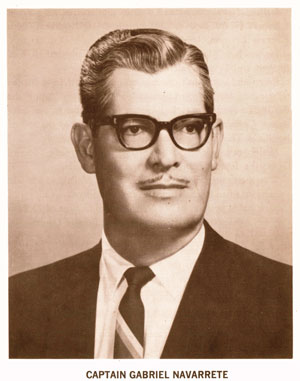 Bill Lansford fought in WWII. He fought in Korea. And then the late Playa del Rey resident fought in L.A. County to build a memorial to Mexican-American soldiers who have been awarded the Congressional Medal of Honor.

“Of the nearly 4,000 Medals of Honor awarded since the Civil War, 40 have been given to Latino-Americans, making them the largest single ethnic group, in proportion to the number who served, to earn our nation’s highest award for bravery,” Lansford, the son of a Mexican mother, wrote on his web site.

One soldier who was denied this honor was Maj. Gabriel Navarrete. He stood up to his commanding officer over what was “without a doubt, the most criticized of moves made by the United States Army in the European Theater in WWII,” wrote historian Raul Morin in Among the Valiant: Mexican-Americans in WWII and Korea.

Navarrete commanded E Company of the Texas 36th Division, America’s first all Mexican-American infantry unit. By orders, all Spanish-speaking soldiers and those of Mexican descent in the division were transferred to E Company. Because the company was comprised primarily of seasoned soldiers and not new draftees, it quickly became one of the most highly decorated fighting units in American history.

The soldiers in E Company had a unique camaraderie. They had grown up around El Paso together, served in the Texas National Guard together and trained together. “We came from the same barrios and attended the same school,” Navarrete was quoted by Morin. “Even our parents had long been friends and neighbors. We all suffered the Depression together.”

E Company fought valiantly during the storming of the beachhead at Salerno, Italy, and during the hard-fought battle to capture Naples. Navarrete became the stuff of legend when he shot a pistol out of the hand of a defiant German officer who refused to surrender to him.

Outside Naples, the Italian terrain grew steeper as the Allies inched toward Rome, fighting the whole way. “The Germans had regrouped behind a natural barrier defense that ran between two rivers,” wrote screenwriter/director Alejandro Grattan-Dominguez in The Dark Side of the Dream. “The Germans held the high ground and were shelling the American troops below with shattering accuracy. Then the Italian winter with its driving sheets of rain made a swamp of the entire area. The Allied advance would be measured not in miles but in blood-soaked yards. In places, almost every yard gained came at the price of another American casualty.”

On Jan. 17, 1944, 25 men from E Company were sent on a dangerous scouting patrol to cross the Rapido River and assess the German line. Led by Navarrete, “they forged the raging waters of the Rapido River and soon discovered the other side was heavily fortified over a long stretch of terrain,” wrote Grattan-Dominguez in his historical novel. “Beyond loomed machine gun placements in a force Navarrete estimated was more than 3,000 men. The recon squad barely made it back. One [American] soldier was killed and several wounded, including Navarrete himself.”

Navarrete reported to his superior officer that it was insane for a single rifle company to attack such a large force. By this time, E Company had been in combat for 16 days and the remaining 156 men had been chewed up; some could barely walk. Yet the troops were ordered in. When Navarrete’s men — his boyhood friends — were about to be sent to their certain deaths, he balked. He went over the head of his immediate superior to complain, but was rebuffed and reprimanded for bucking the chain of command. To silence him, Navarrete was ordered to the hospital. His command was passed to two staff sergeants, one of whom also argued against the mission.

It was still dark when the soldiers reached the river. As they were going across and the dawn started to break and the fog lifted from the river, the small armada of rafts became visible. For several seconds, the Germans didn’t shoot. The Germans realized the mission had suicide written all over it and some actually yelled for the [Americans] to turn back. Of E Company’s original 156 soldiers, only 23 came back, and 12 later died [from wounds].

Navarrete was lying in his battalion hospital cot when he learned of the casualties. Hearing the news, he got up, slipped out of the hospital and went looking for the superior officer [who insisted on the order], intending to add him to the battle’s casualty list.

For his own safety, the superior officer was immediately transferred and Navarrete, who’d been wounded seven times during battles, was promoted and sent home. He was awarded two Silver Stars, a Distinguished Service Cross, the Bronze Star and seven Purple Hearts. Although he was recommend for a Congressional Medal of Honor as well, it was denied because he’d threatened his superior.

Lansford died two years ago this month, but his widow and others carry on the struggle to memorialize these valiant men.

(Ed. Note #1: Kelly Hayes-Raitt blogs at LivingLargeInLimbo.com. She can be reached at This email address is being protected from spambots. You need JavaScript enabled to view it..) (Ed. Note #2: Despite their record overseas, Mexican-Americans were not allowed to become members of either the American Legion or the  VFW for many years. Today, they are in leadership positions in both organizations.)